Your Mother Always Said to Dress in Layers

{Note: I’ve completed five full length manuscripts, but I still feel like a poser when I write about writing.}

Your mother always said to dress in layers and it’s good advice for your manuscript.

I tend to underwrite. You’ll rarely see purple prose from me and when you do, I’ve tried too hard and end up having to scoop all the crap out of it later. So I write a first draft and know it will grow in edits. The only way it won’t is if I cut out a whole butt load of words at the same time.

After I finish first round of edits and revisions, I send the MS to crit partners. And I add more things. More deep POV, more description (I take the minimalist approach) more character development, and the list goes on. When I’m done with that next stop is the betas. (Golly, didn’t I just blog about this not too long ago? Deja vu anyone?)  The thing about betas is they don’t all fall in love with my MS, they often bring up great points. That need to be fixed. So I have to rewrite confusing passages or add more intrigue. (My thirteen year old daughter told me a chapter wasn’t intense enough. Guess what? I listened and fixed it.)

The first additions are easy, slip some in here, a few more there, but after awhile, it starts to feel like you have this jam packed manuscript and to fit a change in doesn’t just take a simple sentence insertion.

I finished a revision on my manuscript on Tuesday and another beta report came shortly after, suggesting a minor character felt two dimensional.  The problem? She was right. So I kicked myself around a for awhile and then began to fret. While said character is mentioned all through out the book, she’s only actually seen close to the end. All information is here-say from the other characters. Not only that, I have well developed conversations running through the manuscript. Fitting in the mention of the 2D character proved challenging. Obviously, I don’t want to make it look tacked on.  It took some discussions with my marvelous crit partner Trisha Leigh to figure out how to work it, but I did. And guess what? It’s so much better.

Sometimes I liken a manuscript to a painting or a drawing. It’s easy for me to do: my (unfinished) degree was in interior design from a school that placed design emphasis on art rather than architecture.  You can start out with a good pencil drawing (the first draft)– but to make the rendering (the colored design) beautiful, you have to add color. Sure, you can add some blue here and some green there, but the drawing still lacks dimension. So you layer your colors, add some colored pencil lines, some hash marks. You build up your layers, level by level, until if you add one more mark, you’ll topple it over the edge. (Jenga, anyone?) You add until you have a rich, full drawing. 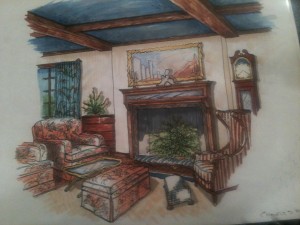 Rendering I completed in design school.

Am I there yet? No. Honestly, nothing’s ever perfect. A design or a manuscript can always be improved upon, but TORN is closer than it was before.

What a great analogy! This will help me, as I tend to be weak on my settings. I typically forget to add that detail in later.

Thanks Patty. It’s good to know I’m not alone in weak settings!

Home  »  Blog  »  Your Mother Always Said to Dress in Layers