Hi all, I’m stopping by celebrate the birth of my new book, To Ride A Puca. Before we get to the goodies I’m giving away, here is a bit about the newborn. It is a young adult historical fantasy about the last of the druids in ancient Ireland. This one was a bit heartbreaking to write and because of that it became very special to me. I hope it will be to you as well.

Invaders are coming to take what isn’t theirs, again.
Neala wants to stand and fight for her homeland, but as one of the last druids, she may be standing alone.
Persecuted, hunted down, forced to live in obscurity, the druids have all but given up. Can the determination of a girl who has barely come into her power bring them together? Or, just when she finally finds her place among her kind, will they end up losing a homeland their very magic is tied to?
Disclaimer: This novel contains some violence and difficult subject matter. It is recommended for mature YA and up.
Available in eBook and hardback at B&N, Amazon, and other retail sites.
I’ll be giving away great prizes, a new one, every week for the next three weeks. This week I’m giving away a signed paperback of TANGLED TIDES by Karen Amanda Hooper. It is about a girl who finds herself tangled up in the underwater world of mysterious merfolk and secretive selkies. It is one of my favorite books of the year so far, trust me you’ll love it! The contest will be open until June 3rd, the winner to be announced on the 4th. To enter go to this link. *passes around cake* 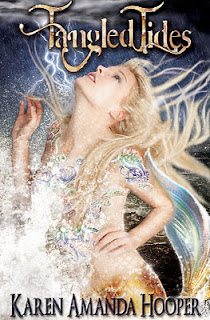 Previous
My Birthday Request from You
Read More
Next
100K and a Winner!
Read More
Subscribe
0 Comments
Inline Feedbacks
View all comments

Thanks for having me over Denise!