Happy Halloween and Also Happy Writer Wednesday.  It seems fitting to be hosting a guest with the last name Blooding on this holiday.  Today we welcome Frankie Blooding to the blog.

1. If you could start by telling us a little bit about yourself.
I’m a little nerdy. I have an alien solar system literally hanging from the ceiling of my apartment. I have a bird, Jack, and a pet rock, Rockie. I also have a super obsession with yarn. It’s threatening to take over. I’m very crafty and love to create things…all kinds of things!
2.  What is your current project? 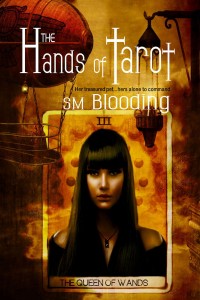 My current project is book 2 of the Hands of Tarot series, The Knight of Wands. Right now, we’re trying to find a peace between the families and the Hands.
3.  Where do you get the ideas for writing? Inspiration?
OMW! I get inspiration through LIFE! Usually.
With this series, however, the inspiration came when I epic-ally failed with another series and I ended up killing all of my characters. Oh man! I cried for days! Then I said to myself, “Self, sweetie, you need to write something completely different.” So I went into my brain, digged deep and found a solar system that had been hatching for the past several years.
The story itself, originally, was about finding courage to stand up for ones self and for others. However, as I’ve watched the world change and flow, the people around me argue and scream about things they’re not willing to change, I knew the story had to be about more.
The world of this series is in huge turmoil. They’re on the brink of war. There have already been several battles that didn’t go well for the Families. The Hands have become the bullies of the world, but they’ve also seen what being a bully has wrought, and they’re willing to seek peace. With conditions.
There is just so much going on, so many characters, people with their own agendas and thoughts and power plays. This book has really taken off in a direction I didn’t see when I started writing The Hands of Tarot.
4.  What advice would you give to writers just starting out?
Write. Write CRAP! Write the good stuff, but write. You can edit the crap out later, but you can’t edit something that isn’t written.
And…if you’re going to play in this pool, you’d better bring your Big Girl Panties. Or Boy Panties. Whichever. There’s no room for whiners, but there are a lot of people who are not going to like what you write. It doesn’t matter if it really is the best thing since sliced bread. There are going to be people out there who will cut your book down and tear it apart. Get tough or get out.
5.  When did you consider yourself an author?
When I published my first book. There are so many lessons you learn between the “I’m a writer” moment and the “I’m an author” moment and it’s all in the publishing. Whew! I’ve come a long way, but, boy, do I have a long way to go still!
6.  Who are your favorite authors/books?
I have so many!!!! Eisley Jacobs, Kurt Chambers, Jay Eckert, Denise Grover Swank, Delilah Dawsom, Jim Butcher…The list goes on and on and on!!! OMW! I just love books and I just love authors! There are authors whose heads I’d truly love to vacation in! Amazing people! Just amazing!
7.  What are some of your hobbies and favorite things?
Oh dear…
Crocheting, sewing, I’m learning to quilt, playing the guitar (it’s going better…ish), learning new languages (I’ll let you know if I ever get good at this one, though), making tarot and demon dolls, walking, hiking…biking along flat spaces…There are a lot of things. LOL!
Now for a little this or that-
Fly or Drive – Fly…but I’d prefer to do so on a dragon. If there is no dragon available, I’d prefer to drive. I like watching the scenery unfold.
Nap or Exercise – Nap!!! It should be exercise, and it usually is since I don’t nap. A Frankie nap entails me lying on the couch with my eyes open for ten minutes. Yeah. I know. I’m wild.
Early Riser or Night owl – Conflicted! I used to be a night owl and that’s when the muse shows up a lot, but I’m forced to be an early riser, and surprisingly, the muse is doing better then. However, what this all means is that I’m an insomiac!
Chocolate or Vanilla – What day of the week is it? *blink, blink* Oh dear. Uh…Butter Pecan!
Chess, Solitaire, Monopoly or Life – LIFE! But I’d prefer not playing with myself. That’s boring. Also, I have Pirates of the Caribean Life…*nods* Oh yeah. Anyone want to come over to play?
Movie or Music – Movie…*grin*
Where can you find Frankie and her books?
Twitter
Facebook
Website/blog

Thank you so much for inviting me over!!! This was a really fun interview!