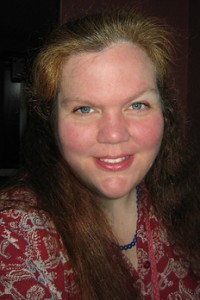 Today we welcome the lovely Cynthia L. Moyer to the blog.  This is Cynthia’s very first blog interview.  We are thrilled to be a part of it.
Cynthia L. Moyer spends her days raising kids and weaving tales in the southwest corner of Washington. She has red hair and blue eyes, her children are Chinese, and her husband is a forester who plants over a million trees each year. Paper or plastic? We’ll take paper, thanks.
A Midwestern girl who lived in the Philippines for a year as an exchange student when she was 16, she fell in love with the Pacific Northwest when she moved to Seattle for college. After college, she found herself living on an Indian Nation above a bay full of whales and otters. She’s also lived in a dollhouse with a pink sewing room, in a purple Victorian twenty minutes from the beach, on a flowery acre under a misty mountain, and now she and her family share their home in the trees with a pack of wild bunnies in the backyard.
In her life she has worked carving ducks out of wood with a burning tool, doing calligraphy, and as a dishwasher in a dinner theater. She was pulling espresso in Seattle before the rest of the country even knew what it was, except for possibly some Italians in New York. She’s been a nanny, cleaned houses, and was a short order cook at the oldest coffeehouse in Seattle during its day, The Last Exit on Brooklyn. She did the grocery store thing, the office supply store thing, the gift shop thing, the deli thing, and was a newspaper reporter for years, and although she never worked in a bookstore, she always wanted to.
She now decorates cakes and colors comic book art, designs all kinds of things, makes amazing bento lunches, misses having chickens in her backyard, and totally and completely loves Doctor Who. She believes in adoption, the power of love, the beauty of lavender fields, the sweetness of chocolate, and the zing of caffeine. She was excited to discover that writing was the perfect way to finally meld everything important to her into one activity.
What is your current project?
I am currently working on an adult mystery called DROWNING SUMMER. This book is the second in my Elliot Lake Mystery series, starring Elliot Lake, a reporter who lives in a small town called Alder Bay on the Oregon Coast. The first book is STOLEN SPRING, and it’s already out there in the world, which is something I’m still getting used to! The series is a mystery, but pulls cozy elements in as it is set in a goofy small town on the Oregon Coast and there is plenty of humor as well as crazy characters who you’ll meet along the way. There are paranormal elements, and those will come more into play toward the end of the series, and of course, there is a love story. Or two. And a cast of the cutest kids you will EVER want to meet! 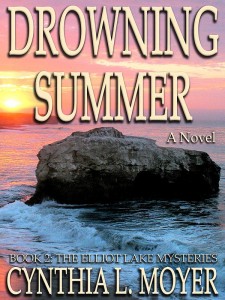 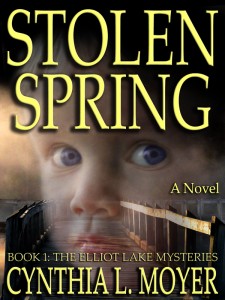 Very good interview! And love the cover for book 2!

Wow, your books sound so good. I can’t wait to get an e-reader. I can’t bear to read on the computer since I do so much of that already, but I will one day be able to catch up with you, Cynthia, and Denise, too. I love stories with suspense and humor.
Thought your advice to writers was very wise.
Congratulations!!!!

Only on the Internet can an individual be popular and lonesome at the same time. And my blog is a collection of responses individuals don’t desire to hear to concerns they didn’t ask.