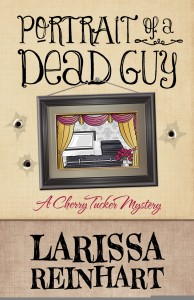 I’d like to introduce you all to Larissa Reinhart! Yesterday was Larissa’s book birthday for her debut novel PORTRAIT OF A DEAD GUY.
Larissa, tell us about your debut novel.
Thanks so much for having me here, Denise!
My debut is called PORTRAIT OF A DEAD GUY, and stars a sassy, Southern artist named Cherry Tucker. In her hometown of Halo, Georgia, folks know Cherry as big in mouth, small in stature, and able to sketch a portrait faster than buckshot rips from a ten gauge — but commissions are scarce. So when the well-heeled Branson family wants to memorialize their murdered son in a coffin portrait, Cherry scrambles to win their patronage from her small town rival.
As the clock ticks toward the deadline, Cherry faces more trouble than just a controversial subject. Her rival wants to ruin her reputation, her ex-flame wants to rekindle the fire, and someone’s setting her up to take the fall. Mix in her flaky family, an illegal gambling ring, and outwitting a killer on a spree, Cherry finds herself painted into a corner she’ll be lucky to survive.
Flaky family and quirky southern mystery? Sounds like my kind of book! Now I know this is your first published novel, but is this your first novel and you intend to keep them hidden away? I say that my first novel is chained in the dungeon of my external hard drive.
Of course! My first novel was a YA paranormal romantic suspense featuring angels and demons. Hmm, nobody’s done that before! LOL. Of course, I didn’t know that when I wrote it.  I mark it as a good education in writing. I think the first draft was close to 400 pages. Then rewrote it again. And again. And then said, let’s try something new, shall we?
Are you a pantser or a plotter?
I am a pantser who begins with developed characters, a “what if” situation, and an idea about the ending. When I’ve tried plotting I never stick to the script. It works great for some writers and would help me to write faster, I think. But now I just let myself do my thing.
I’m a combination of the two. I usually have an idea what’s going to happen then let the characters do their thing. (Although my developmental editor is prodding me to be more structured.)
Do you have any project coming out in the future?
I’m finishing up the second Cherry Tucker novel, STILL LIFE IN BRUNSWICK STEW. If my editor likes it, hopefully it will be out in the spring. I’ve also got a paranormal romantic suspense (can’t get away from them!) waiting for a revision and the makings for a international romance set in Japan, where I’ve lived off and on over the last fifteen years. I would love to do a historical mystery series, too, so doing a little research on that as well.
An international romance set in Japan? That sounds intriguing!!!
Now we’re going to play This or That.
Chocolate or vanilla?
Chocolate. Always chocolate. Unless it’s vanilla with hot fudge. I like my ice cream bitter and dark, just like my men.
Night owl or early bird?
If I didn’t have children, I would say night owl. School cramps my night owl style.
Movie theater or DVD?
Again, if I didn’t have children, movie theater. I love my children though, so I’ll say DVD.
Mountains or beach?
That’s difficult! Mountains? No beach. But I do love the mountains. I live in Georgia. We have both.
Summer or winter?
Summer, baby! I hate the cold. Another reason I love Georgia. Which means I should probably amend the previous answer. But the mountains are gorgeous in the fall. And in Georgia, the fall is warm:)
Anything else?
I’m trying an experiment with Pinterest, which I adore. I had so many boards for Cherry  that I gave her her own PInterest account. If there are any Pinterest lovers out there and you run across some DIY clothing ideas or some great Southern food, put my name @Larissa Reinhart or @Cherry Tucker in the comment section. I’ll pin it to my board and hopefully your idea will be in my next book! Cherry loves to bling out and restructure her Walmart clothes into unique pieces and her sister is an amazing Southern cook. I turn to PInterest a lot for research ideas!
OH! This is a great idea! I’m trying to get more active on Pintrest. There’s only so many hours in the day… 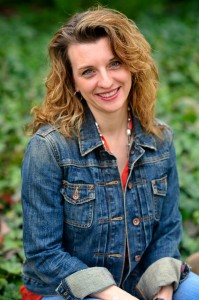 Bio:
Larissa considers herself lucky to have taught English in Japan, escaped a ferocious monkey in Thailand, studied archaeology in Egypt, and survived teaching high school history in the US. However, adopting her daughters from China has been her most rewarding experience. After moving around the Midwest, the South and Japan, she now lives in Georgia with her husband, daughters, and Biscuit, a Cairn Terrier.
She loves small town characters with big attitudes, particularly sassy women with a penchant for trouble. PORTRAIT OF A DEAD GUY (Henery Press, August 28, 2012) is a 2012 Daphne du Maurier finalist, a 2012 The Emily finalist, and a 2011 Dixie Kane Memorial winner. When she’s not writing about Southern fried chicken, she writes about Asian fried chicken at her blog about life as an ex-expat at theexpatreturneth.blogspot.com. She and her friends also chat about books on Facebook on Wednesdays at Little Read Hens.
Links:
LarissaReinhart.com
Facebook
Twitter
Goodreads
Pinterest
Cherry Tucker’s PInterest site

Thanks so much for having me on Denise! I such a fan of yours! These were really fun questions and I look forward to meeting your friends today!

It’s awesome to have you and I can’t wait to read your book!

Thanks Anise! It’s great fun and good way to organize research. I’m pretty visual so it works for me!

Love this interview, Larissa. Portrait of a Dead Guy was hilarious and full of sexy men and a twisted mystery. Can’t wait for Still Life in Brunswick Stew. Great title! Congrats on the release!

Thanks Terri! And can’t wait to read your next Rose Strickland mystery! I loved DINERS, DIVES & DEADENDS. Talk about hilarious with hot men!

Larissa, you are the one who got me addicted to Pinterest–thank you! Great interview–awesome book!! I love Cherry Tucker!!

Thanks so much Susan! And I’m always happy to help people with their addictions!