**Today and tomorrow Phoenix Splinter will be FREE on Amazon!!!**

Today I welcome  Branli Caidryn as my Writer Wednesday guest. I have no picture of Branli because he has a strict “no photo” policy. He’s recently moved to Seattle and invited me to do Irish Car bombs with him, so my evil plan is to get him drunk and have my way with him. By taking his picture. What did you think I meant? In spite of Branli’s VERY RECENT move, he still had time for our interview.
Branli, is there any particular author or book that influenced you in any way either growing up or as an adult?
The Power of One by Bryce Courtenay.
The book is about Peekay and his adventures growing up; love, loss, perseverance. He’s orphaned early on, by a mother that’s mentally unstable. He’s picked on at the orphanage. His favorite pet is killed by bullies. And the one person he’s ever looked up to, leaves him. I was able to relate to this character and his many losses growing up. To this day I can’t bring myself to reading it again, the heartache was just too much the first time.
Oh, my. Now I want to read this book seriously. But I’ll save it when I need a good cry. 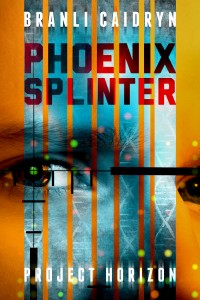 What is your book, Phoenix Splinter, about?
The book is centered around Keith Groenewald, a 19-year old college student with supernatural powers gained from experimentation at Area Fifty-One, a top secret military base. He escapes the lab, leaves the base and is “protected” from government hands by a secret society known as Veluz. Veluz is a shadow organization that profits from global events. With Keith at their side they’re able to enhance that influence, by sending him on covert missions and espionage assignments.
As the story progresses readers come to realize Keith’s existence and purpose is a lot more complex. He’s not just this mercenary for Veluz, but something much bigger.
Some titles come easier to me than others How did you come up with the title for Phoenix Splinter?
Keith is the only successful experiment from an abandoned project. Though some have called him a phoenix–seemingly rose from the ashes of the defunct project and even describing him as an ember–he is a much smaller fragment. He is a sliver, a splinter of that old project.
I LOVE the title even more now. Do you ever get writer’s block? AND how do you combat it when you have it?
All the time. In fact, a lot more than I want to admit. It usually isn’t story related, as much as I need to bridge two plots or scenes. It’s incredibly frustrating.
One of many approaches to overcoming the block is to re read what I have so far. Going back a few chapters and re reading up to the point where I’ve stopped helps get back into the world, back into the story. Most of the time this helps.
Who has been your biggest support as a writer?
Can I just say twitter and round up everyone? 🙂
Writing, as I imagine it is for many, is a solitary endeavor. For the longest time I didn’t know any other writers. But, I have to admit Denise and LK Gardner-Griffie (@lkgg) have been the biggest cheerleaders 🙂
Awww… <3  Twitter IS awesome for meeting other writers, isn’t it?  I met so many who have been so supportive. It’s like on ebig writer’s water cooler. We get to stand around drinking and chat. I know a lot of authors were avid readers as children. What was your favorite book as a child?
Abel’s Island. The story of survival and love really captivated me for some reason.
When did you consider yourself a writer?
I would say two years ago, when I went back to the novel I finished writing five years prior. I made a promise to myself that I’d clean it up and publish it.
And now for a little fun with this and that:
Would you rather fly or drive?
Fly. Though I do warn you I survived a 19hr drive from SoCal to Seattle recently. I don’t ever want to drive beyond 30min again!
Have coffee or tea?
Both!
Coffee is certainly my drug of choice for jump-starting that muse in the morning.
Tea for those late nights trying to churn them words out!
Play the piano, guitar or drums?
Piano.
The melodies created, the countless scores on my ipod, always have a way to free my mind and make my imagination soar!
Take a swim or go for a run?
Run.
There’s a slight thrill to just about every run. Not sure how to describe it. I always picture that one scene from Powder, Jeremy running in that field in his final moments. Totally cried.
Watch a movie at home or at the theater?
Watch a movie at home! It gives one the opportunity to get some close friends, get your favorite foods together, and enjoy it all at once!
Thank you, Branli for stopping by today!
Here are some places where you can find Branli and his work.
http://www.amazon.com/Phoenix-Splinter-Project-Horizon-ebook/dp/B008R9DICI
http://branlicaidryn.com/
http://twitter.com/branli
https://www.facebook.com/BranliCaidryn
https://plus.google.com/105161196312833977684/posts

Lovely interview, you two! I have Phoenix Splinter on my iPad and am looking forward to finding a quiet moment and a quiet corner so I can settle in for a good read. And, Denise, you do realized that you need to move to Seattle, right? It’s where all the cool kids hang out. (I love that you’re here, Branli!)

Everyone keeps telling me I need to move there! If you all will come pack up my house, I might consider it. LOL

Sure. After I pack and move mine next month, I’ll be right over. (Heh, I’ll be well practiced, but I don’t guarantee that anything will arrive intact.)

Many thanks for the opportunity, Denise! <3
And yes, as Monica pointed out, you CLEARLY need to move here. I call this a sign 😀