Denise again. Remember how I said it all started with Twenty-Eight and a Half Wishes? Well, the beauty of the Rose Gardner mysteries is that each book is a standalone. Much unlike my other books! So a reader can pickup Twenty-Nine and a Half Reasons without having read the first book and just be fine. But why miss out on how it all began? Don’t you want to read about Rose’s blind date with the Pillsbury Doughboy!  Or when she bought a nightie Walmart? (Scandalous!?!?) Or Joe teaching Rose the rules of drinking on her front porch…(I think that was my favorite scene to write in the whole book.**)
Today’s reason to love Rose Gardner is: 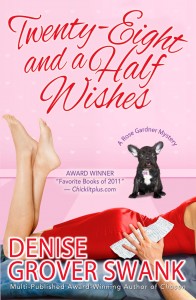 An autographed print copy of Twenty-Eight and a Half Wishes!

Trust me, you’re gonna need to read Twenty-Eight to know the answers for Part Two of Twenty-Nine Reasons to Love Rose Gardener! (And the giveaways in Part One are nothin’ compared to some of the things we’re giving away in Part Two.)

I have something else to add! 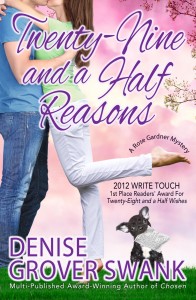 An autographed print copy of an ARC* of Twenty-Nine and a Half Reasons!!!

(*ARC: Advanced Release Copy– this book WILL have typos because it hasn’t been through proofreading at time of printing.)

Today’s question:  In honor of my favorite scene to write in Twenty-Eight and a Half Wishes, what was one of the first  “rules of drinking” that you learned? You have until Thursday night, midnight CDT June 21 to leave a comment. Winner will be picked with Random.org.

What was the first “Rule of Drinking” that you learned?

** When I wrote the front porch scene with the rules of drinking, I was on Twitter and Facebook asking for suggestions to include in the rules.  I also started a challenge.  It was Facebook folk against Twitter peeps to see how many people I could get drinking while I worked on Rose’s first experience with alcohol. It was close, but Facebook won– MUCH to my surprise!

THIS DAY IS CLOSED. The winner is #26– Janelle!

The first rule I learned: Beer before liquor, you’ll get sick quicker… Liquor before beer, you’re in the clear.
Has come in handy, drinking girly drinks during the day at block parties and family BBQs and beer pong at night.

First rule: Beer before liquor, never been sicker. Liquor before beer, you’re in the clear.
Still the first thing that goes through my mind whenever alcohol is around.

Ugh. The first time I got well and truly drunk (thanks to my husband who wanted to see me drunk) I learned that ice cream and alcohol do NOT play well together in my stomach. *shudder*
Bonus rule? I should not be allowed to communicate with the outside world when drunk. Jerry Springer. E-mail. ‘nough said.

NEVER drink on an empty stomach.

The first rule I remember learning was if you’re going to get really, REALLY drunk, make sure whatever you eat will taste the same the second time. (Bananas, plain pasta and bread, in case you’re wondering). This rule actually got more use during my first pregnancy when I was so sick, actually…

Just because it doesn’t TASTE like there is a lot of alcohol in it doesn’t mean it won’t knock you on your ….

I don’t really know any drinking rules, but I do remember emarrassing my daughter by laughing way too loud in a restaurant when I had two mrgaritas in a row. I am a total lightweight.

Never, ever, drink warm beer while in a boat in the middle of a lake!!!!

Don’t Drink On An Empty Stomach

Never drink on an empty stomach.

Don’t drink on an empy stomach

Alcohol can never act as a meal replacement…eat the booze

Beer before liquor makes you sicker, liquor before beer you’re in the clear.

Make sure you are always in good company.

When playing drinking games block the bottle with your tongue when you have to drink. As a newbie I would loose at several games and couldn’t figure out why my best friend never seemed as drunk as I was. Yeah she faked over half her drinks. ;o)

Only eat White Castles (or Crystal’s down South) at 4 am and while intoxicated. It’s the same going down and up. Hey! If you’re gonna throw up, might as well semi enjoy it (kidding).

First Rule of Drinking: being raised Catholic the first rule of drinking I ever knew was, “All fundraisers and school events should include a beer booth”. -lol-

Never drink alone. What’s the fun in that, anyway?? 🙂

First Rule of Drinking that I know is Don’t Drink and Drive. Never drink on an empty stomach. Always be close to a bathroom.

#1 drinking rule:
– make sure your drinking with a friend rather than a person you don’t like. By the end of the night they has so much gossip on each other you have no choice to be friends. I broke this rule ONCE and gained a great friend years ago. 🙂

Size matters when it comes to alcohol consumption! You wanna drink with the big dogs, you better be one yourself.

My first rule I learned was I
Can’t drink…:-). I’m a total light weight!

Not a first lesson but one I learned the hard way. Jose Cuervo is a dirty stinkin pig! Steer clear of him.

If you are female and drinking while walking around the neighborhood, you should know how much ‘clearance’ you need when doing the pee squat in someone’s yard so you don’t get your pants all wet.

Not a rule so much as a life experience…Taco Johns and Seagrams & 7 don’t mix. Really. Like from 25 years ago and I STILL can’t eat Taco Johns. LOL

Not really a rule per say, but drinking Vodka straight has terrible consequences. I can assure you that you do NOT look bad ass when you’re throwing your guts up.

eat lots of starchy food before you drink.

I think “never drink on an empty stomach” is just about EVERYONE’S first rule learned. LOL. I recall getting SO SICK off of rum and coke and then trying to settle my stomach with the only thing in the house: Twizzlers.
Um, yeah. Didn’t work too well. o.O
The second lesson was that after getting (really really) sick off rum and coke twice, I can no longer drink rum without getting sick. *sigh*
🙂

Drink a glass of water between drinks to avoid a hangover…unfortunately, after a few drinks you tend to forget about the water! 😉

THIS DAY IS CLOSED. The winner is #26– Janelle!

I learned that eating bread helps absorb the alcohol which will usually help with a hangover and feeling sick.

It’s hard to find your posts in google. I found it on 12 spot, you should build
quality backlinks , it will help you to get more visitors.
I know how to help you, just type in google – k2 seo tips