Thirty-Four and a Half Predicaments Sneak Peek Scene

ONLY ONE MORE DAY UNTIL THE RELEASE OF
THIRTY-FOUR AND A HALF PREDICAMENTS! 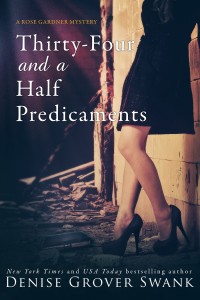 How about a sneak peek scene?

I followed Beulah to the register and gave her Mason’s credit card. She ran it through without comment, but as I signed the slip, she glanced at the name and raised her eyebrows. “Is there something you’re keeping from me?”

My heart leapt into my throat. What did she mean? Did she suspect I’d stolen Mason’s card? Or maybe that I was taking advantage of him? But a smile spread across her face. “Girl, are you marrying Mason Deveraux?”

Neely Kate’s head whipped around to look at me, her eyes wide with surprise.

I shook my head. “No. Nothing like that. At least not yet.”

“But this…” Beulah waved the card at me, and my face burned with embarrassment.

“I think you two make a lovely couple.” The voice behind me sent ice water through my veins.

I spun around and faced my least favorite redhead, although it was a very tight race with Deputy Abbie Lee Hoffstetter. “Hilary. I’m surprised to see you here.”

She glanced around, then smiled at the stylist. “Why, everyone knows Beulah is a miracle worker. In fact, I’ve bragged about her so much, I have friends from Little Rock and El Dorado who come here to have Beulah her work her magic.”

I stared at her in shock. While she’d moved to Henryetta to try to convince Joe to resume their volatile relationship, she’d made it perfectly clear that she considered the town equivalent to a third-world country. The fact that she would not only slum it by going to a Henryetta hair salon, but she’d tell her friends about it, was jaw-dropping. Although I had serious doubts she was capable of having friends.

“So are you and Mason Deveraux secretly engaged?” She grabbed my left hand. “Tell him to get you something simple. Probably a round solitaire, nothing too fancy—that wouldn’t fit you at all. A third of a carat would be good.”

Neely Kate put a hand on her hip as I jerked away from Hilary. “I don’t think that’s a good idea, considering Joe gave her a ring that looks exactly like that. Last I heard it’s in her underwear drawer, just waiting for her to change her mind.”

Hilary was still holding a fake smile in place, but it looked like the effort of holding it would give her a headache.

Neely Kate leaned closer. “Because we both know that Joe Simmons would marry her in a heartbeat. All she has to do is snap her fingers—” Neely Kate snapped hers, waving her arm with more sass than I’d seen her use in weeks, “—and he’d take her to the courthouse as soon as he could get her there. But then look at you, wearing an engagement ring you had to buy yourself because he’d rather set himself on fire than marry you.”

Every woman in the salon was watching our exchange with open mouths. Beulah could have sold tickets at twenty dollars a pop and she would have sold out in thirty seconds flat. But as Neely Kate had pointed out when we were looking for her missing cousin a month ago, the hair salon was the absolute best place to get caught up with the town’s gossip. And we sure were putting on a show.

Suddenly I realized something—rumors that I was playing both Joe and Mason were going to spread like wildfire. I grabbed my best friend’s arm and tugged her back. “Neely Kate.”

Hilary turned toward me, the look in her eyes saying she wanted nothing more than to stab me with a pair of hair scissors. “Were you engaged to Joe?”

I took a step back, the room closing in on me. No, it was the fifteen sets of eyes that were glued to me. “Not technically.”

The women began to murmur.

“He proposed, but I never said yes.”

I heard the bell on the door ring, signaling the arrival of yet another gawker.

“When?” Hilary forced out through gritted teeth. “When did Joe propose and give you the ring?”

“What does it matter, Hil-monster?” another familiar voice asked. “She’s the one he wants to marry, not you. That’s all you really need to know.”

Hilary stepped back and shot a glare at Joe’s sister, Kate, who grinned back like the Cheshire cat.

She’d shown up in town right after Christmas. Rumor had it she was taking up residence at the nicest motel Henryetta had to offer. I had no idea why, other than she seemed to be snooping around about anything that had to do with Joe. Violet, who had more contact with Joe than I did, said he was aggravated by his sister’s sudden appearance and had very little to do with her. She’d been in the nursery when Neely Kate collapsed. And although she’d been antagonistic before the trauma, she’d insisted on riding to the hospital with us in Joe’s sheriff’s car. She’d even stuck around to try and make me feel better in the waiting room. I hadn’t seen her since, but I’d heard she was still around.

Now Kate’s gaze was locked on my face. “Do you still have Joe’s ring?”

I started to answer, still in shock that this was happening, but then I came to my senses. What was Mason gonna think if he heard about this? “Neely Kate, we need to go.” I pulled on her arm, but she refused to budge.

Kate turned to my friend and picked up several strands of her newly colored hair. “Looks good on you, N.K. I could never pull off pink.”

Hilary put her hands on her hips, finally gathering herself enough to make a rebuttal. “What are you doing here, Kate? Are you following me again?”

Kate shrugged. “It’s a small town. I can’t help it if I keep running into you. This place is like a pinball machine.”

Hilary lifted her chin with a haughty air. “If you continue to harass me, I’ll be forced to file a restraining order against you.”

Kate smirked. “That shouldn’t be too hard, considering how friendly you used to be with the current Fenton County assistant district attorney.”

“What?” I gasped in horror.

Kate crossed her arms, a satisfied gleam in her eyes. “You don’t know about Hil’s history with your current boyfriend?”

I shook my head, finding no words, but Neely Kate had no such trouble. “What in Sam Hill are you talkin’ about?”

Kate tilted her head toward Hilary. “You should ask Hilary for the details. Everything I know is hearsay.”

Hilary’s mouth pinched into a tight line, making it clear she didn’t intend to say one word. I was grateful for her uncharacteristic silence; I had no desire to hear anything about Mason from her.

I took a deep breath and turned to face the gathered stylists and their clients, who were still very much watching us with bug eyes, not even pretending to do otherwise. “I’m very happy with Mason, and while I love him very much, we are not yet engaged—secretly or otherwise.” I grabbed Neely Kate’s arm and tugged. “Let’s go.”

O.m.g. wow. Just wow. I can not wait!! I think I might even pee my pants waiting for this. Just too excited!!

Woah! Mason and Hilary? Just… is it tomorrow yet?

You know when you tell yourself you’ll eat one piece of the chocolate block. And you have one piece and go into a frenzy and eat the whole lot. Well this teaser feels like this but I can’t eat the whole block and it hurts lol Denisssssseeeee! Sounds so good!

Love these books have read all of them can’t put’em down I let them read to me while I’m walking, doing house work an on computer,keep writing I’ll keep reading.Thank you Denise

Can’t wait for tomorrow!!! So many fascinating and engaging characters and storylines….anxious to read about Him-monster and Mason…May go back to team Joe.but…he has to grow a pair!

WOW!!! That makes the anticipation for tomorrow worse! Now another twist Hillary and Mason, hmm?!?!

Ok. Counting down the hours…… TicToc… Such a teaser. Need to know more!

Holy moly! That was unexpected!
Can’t wait for tomorrow! I think I feel a cough coming on, maybe I should stay home from work.

Thirty-Four and a Half Predicaments is Now Live! | Denise Grover Swank

Home  »  Blog  »  Thirty-Four and a Half Predicaments Sneak Peek Scene