The Death of Me-- a short memoir 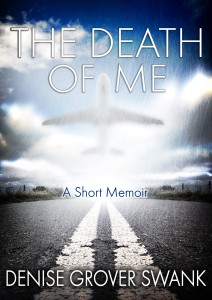 I’ve been working on a piece for over a year now. I’d pick it up and work on it and then set it aside. I thought I finished it at one point, but then I realized I’d only told half the story. It wasn’t done yet.

The problem is the piece wasn’t fiction. It was my life. The piece starts the day after my husband’s plane crash. In my first round of writing, I ended it at my husband’s death, but it didn’t feel right. After a few days, I realized that my husband’s hospitalization was only the beginning. The story was really about my grief. So I kept adding to it, not knowing where it would end. Then out of nowhere,  I realized the ending. The first anniversary of Darrell’s accident. The piece encompasses one full year

This is a short piece, only 9000 words. Part of those 9000 words are a forward and my story notes at the end. Sandwiched between the two, I’ve laid my soul bare.  It’s a strange thing, told in snippets, almost like a short story, but it’s real. It happened to me as I remember it. This piece records the death of the person I was before the accident.

Honestly, this is the hardest thing I’ve ever published. I’ve had lots of hand holding in the background, encouraging me I could to do this. I have exposed myself to the world, ugliness and all. I feel like I’m standing naked in the middle of the street. Much, much thanks to Tonia Sherrill who is living what I went through. Tonia was the second biggest determining factor  in me actually letting The Death of Me loose into the wild.

But I can honestly tell you I wouldn’t be doing this if it weren’t for the support and encouragement from my copy editor, Jim Thomsen. I sent this piece to him and asked him to edit it, telling him I wasn’t sure what I was going to do with the piece, if anything. He has been one of my biggest supporters in publishing it. He helped me write the blurb. (Okay, he mostly wrote the blurb. LOL) Every time I get cold feet, which has been multiple times, he’s propped me back up and assured me it was a piece worth sharing. Jim has copy edited every book I’ve written as well as my Chosen short stories.  I know he won’t bullshit me. I can trust his word.

One problem I faced was what to call The Death of Me. It’s not a story, although, as I mentioned, it reads almost like one. It’s not a memoir. It’s much too short. After talking with several people, I settled on “a short memoir” but truthfully, that seems inadequate. It feels like snapshots of moments in time, all pieced together with one commonality. Grief.

My biggest fear is that people will think I’m sensationalizing a tragic period in my life. I assure you that is not my intention. My goal is to reach out to others who are experiencing grief, whether it’s cause is death, divorce, a loss of a job, or any other reason. I want them know that they are not alone. That others have gone through this before them and made it to the other side. I survived this. You will too.

The Death of Me is with my eBook formatter and will be available either the end of this week or the beginning of next week. If you want to add it to your Goodreads “to be read” list, you can do so here.

THE DEATH OF ME blurb:

On that afternoon, her husband of ten years crash-landed his malfunctioning single-engine plane in Murfreesboro, Tennessee. Dr. Darrell Swank suffered multiple fractures, and third degree burns over sixty percent of his body when the gas tank exploded as he crawled away from the wreckage.

Over the next five weeks, she struggled to be a mother to their children while she kept a near round-the-clock vigil at the hospital. Darrell’s survival was questionable from one day to the next, and even if he survived, would he be the same man he was before the crash? Did his fate depend on this test of her faith?

The Death of Me is the true story of a wife and mother living day to day through a fog of shock and unimaginable agony. And, alone in the aftermath, fumbling for some way to not only survive, but to thrive.

It is a story of pain, of release, of forgiveness. And of healing, resilience, and rebirth.

It is a story of a writer finding her voice.

This is such a strong piece and I can not wait to read it. My husband will most definitely read it as well because he relates to you because his dad was in a plane crash accident during the time he served with the Air Force and his helicopter crashed and for months the doctors kept him on life support insisting to let go. But one day he woke up not knowing who he was or who was this woman claiming to be his wife and a teenage soon soon to go start his training at Perris Island with the Marines. He lost his entire memory and that changed my husbands life forever. He lost his father in a way but he was alive only he was a stranger to his dad.

He struggles day by day and tries to be that same man before he left but it’s inevitable because a lot changed and will never come back however he has shared this with other an has helped others overcome. So your short memoir will be a great help to many and I can’t wait for it to be out. You’re a strong, courageous and brave woman who has gone through a lot in your lifetime and you’re a role model to follow.

Need I not mention how much I admire you for being who you are not letting things change you and for overcoming the hardest time of your life.

Oh My God!! Denise this truly touched my heart and soul!! I will definitely buy this and read it!! I am already a fan of your work and even though I already had a lot of respect for you it has grown tremendously!! Thank you for sharing this with us!! To some extent I can relate to what I just read and I feel that in some way even though from a distance it has brought us closer. I hope that makes sense. I will continue to follow your work and hopefully learn from you. ((( HUGS )))

thank you for sharing your story. so courageous. so well written!

I just read ‘the substitute’; really enjoyed it and looked you up. Your comment on writing with your children around you caught my interest. I read The Death of Me blurb and it touched me. I too lost my first husband in a car crash in 1983 so when I read of another person with such a devastating loss I want to reach out. I am glad you have your writing and your children to help you rebuild your life.