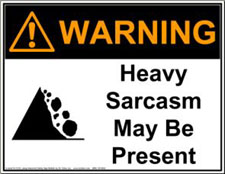 I’m a bit on the sarcastic side.

This trait never fails to get me into trouble and I find myself pushing the limits some days. I’m sarcastic in social media as well, but I find that I have self-imposed boundaries.  Facebook is composed of predominately conservative friends, while Twitter has more liberal followers. I find that Facebook is my censored self. Twitter the more real me.

Nevertheless,  born a people pleaser, it bristles when I realize I’ve offended someone. This morning I seemed to be on a roll so I Tweeted and Facebooked similar variations of this:

Facebook friends are full of support and encouragement, but Twitter is another kind of playground. @JentheAmazing called me out:

I read her Tweet (as I walked countless times around the walking track at my kids school) and thought. “Huh. She has a point.”

I’ve been thrilled beyond belief with the reaction to Twenty-Eight and a Half Wishes. Everyone loves Rose. She’s sweet, niave, and full of hope and life.

And she’s everything my book Chosen is not.

Soon after my copy editor finished with Twenty-Eight, I sent him the first three chapters of Chosen with the warning: Chosen is the bipolar opposite of Twenty-Eight and a Half Wishes.

I worry. Readers who loved Twenty-Eight might be offended by Chosen. There’s liberal use of the “F” word. The world is darker. There’s some tough scenes. If Twenty-Eight if full of Rose’s hope for accomplishing all her wishes, Chosen is full of hopelessness.  Yet,  my two main characters still push on. Because really, what is the alternative?  I love Chosen because of that.  I threw one impossible situation after another at them and they picked themselves up and moved forward, if for no other reason than to simply survive.

This is a darker me than people are used to seeing, and I think that worries me, too. What will people think? But in the end, (and I have no idea why I have to relearn this lesson time and time again) I have to be true to ME. When you write, to create real and believable characters, you have to delve into yourself and discovers things you might not have realized before. Sometimes those things are beautiful. Sometimes those things are ugly. But they are pieces that create the whole you.

Some readers might think it strange that I can write two completely different genres. But the world strives for balance. Good and bad. Black and white. Ying and yang. Without evil, good cannot exist. (This is a concept my friend and crit partner Trisha Leigh and I have been exploring lately in our writing.) My psyche needs the funny AND the dark. They balance each other out. Two parts of me that add to my whole.

Still, I’m prepared, as prepared as I can be, for the backlash. But Jen is right. If I can’t handle the possibility offending people, I’ve chosen the wrong profession.

I’m totally behind this and not just because you quoted my Twitter blurb. If I read something by an author and ENJOY it, I’m loyal to a fault. I will read ANYTHING that author puts out after said good book. That being said, I do not want the same style of book from that author. Sure, specific genres are one thing, but if the characters read the same, feel the same, it says to me the author is riding the coattails of something that was successful. Variety is the spice of life, but it’s also the mark of a good writer. Variety can pull in different veins of readers. Someone who may not have been drawn to you by Twenty-Eight and a Half Wishes may LOVE Chosen. Write what’s true to you (now I’m just quoting back what you’ve already said).

Also, all 3 of WIPs are completely different styles with varying levels of dark and light. It makes it easier to keep them segregated in my mind and it keeps me on my toes.

I think you’re an amazingly talented writer. Also? I think people are way too easily offended (or maybe I’m just too snarky myself). Either way you have to write the stories you are passionate about. Just like your children, those stories are not all going to be the same but that doesn’t mean that they aren’t all a completely organic part of who you are.

The world is a place of light and dark,as well as interesting shades of gray. As a writer, I prefer to add humor to my stories to balance out the grittiness. It’s a fine balance. My agent didn’t like one of my books because it starts out humorous and segues into darkness. There’s still a lot of humor mixed with the doom and gloom. I love it.
I’d say it’s all a matter of taste on the reader’s part. Write what you love and the rest will follow. Don’t worry about what others think.

I don’t think it’s strange at all, I love it! And while I’m absolutely enjoying Twenty-Eight and a Half Wishes, I enjoy dark fiction as well. I have no doubt I’ll love Chosen as well because it isn’t just your characters I love, it’s your writing my dear. You are a fabulous writer and that is the key. 🙂

I saw this post and laughed. It seems I am an equal opportunity offender on Twitter as well 🙂

And also let me say, I am loving Twenty-Eight. It is taking me time to get through it, but not because I don’t want to. Real Life sometimes gets in the way of what we would like to do.

As far as writing goes, I firmly believe you can’t please everyone, and unfortunately, as writers we want to do that. We want everyone to love us, but it just can’t happen. I’m looking forward to seeing the darker side in Chosen!

It’s great that you are getting thoughts from this post as welkl
as from our argument made at this place.