I Got to Meet a Fan

Okay, I’m going to be honest and say that writing that title feels weird. Maybe I should change it to reader. But she really was excited to meet me… hmm. This is a conundrum.
Nevertheless,a mother sent me a message on Facebook and asked if there was anyway if she and her daughter could meet me at a local Starbucks. Marybeth, her sixth grade daughter, had to do a report about an author.  Marybeth had read Here and loved it.  (Her mother Becky also read Twenty-Eight and a Half Wishes as well as The Chosen series and wanted to meet me too.)
Those of you who have known me since my early blogging days know that I will do just about anything to have a reason to go to Starbucks.
And I was also intrigued that someone actually WANTED to meet me.
Me. Weird.
So I took a shower and put on something besides sweat pants and went out in public so we could met last Friday at a local Starbucks. Marybeth asked questions from her list while Becky asked questions based off my answers. Marybeth and Becky were so sweet that it was a pleasure to spend an hour with them.  I was very impressed with Marybeth’s questions and had to give some thought to several of them. One question in particular made me take a trip down memory lane: What role did your family play in your writing when you were little ? 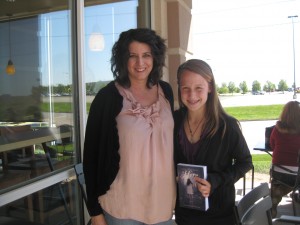 Marybeth got a scoop. I told her a story about my very first rejection, a story I don’t think I’d ever told ANYONE.
Like most writers, I’ve always loved to write. I wrote multiple short stories when I was a kid. One of them was about a little girl who had cancer. I don’t remember anything else about the story, but I remember my mother thought it was good. She took my hand written on wide rule spiral notebook paper story and sent it to Redbook magazine.
Would you believe they wrote me back?
It was a form rejection letter, but it was my first. It didn’t devastate me like my later rejections did. If anything, I was thrilled they wrote me at all. What I took away from that experience was that my mother thought I was good enough. I was good enough to be published.
Maybe someday I’ll tell you about the time I wrote President Gerald Ford in the fourth grade and got a response from his press secretary.

This was super sweet of you! Btw, how cute is that picture of you two!? 🙂
Also I feel totally weird, I never realized your books were also sold in physical copies. I always just see the kindle button and buy buy buy. Now I can stock my shelves of each of your books! 😉
I always get peeved when I see kindle covers that are super pretty and they aren’t a PB/HB yet and then when/if they are they’re a completely different cover. So, I’m thrilled yours are the same!
Were you freaking out excited when you got a response from his press secretary? 😀 I think you should tell that story someday.

It’s a surreal experience meeting your first fan isn’t it? It’s such a wonderful thing though to have that affirmation of why we do this. Makes it all worth it!