Hunted-- Partial Excerpt from Chapter One 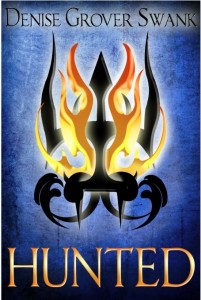 Hunted, the second book in The Chosen series is now available in print. eBooks will be available in all formats on Tuesday, November 22.

Beads of sweat clung to Will Davenport’s forehead as he watched the house through binoculars. A gust of wind kicked up a swirl of sand that blew into his eyes and mouth.

Fucking sand. He turned and spit. He’d had enough sand to last a lifetime. When he left Iraq, he swore he’d never go back. And he hadn’t, but Arizona in the end of July was too similar to suit him. His frustration mounted with every passing minute. There was absolutely no activity in the house, not that he could see, and he dreaded reporting the results.

His intelligence had told him the group known as the Cavallo had made a safe house out of this small stucco residence in the middle of nowhere. Reports that a small blond boy had been seen here over a week ago seemed to confirm the information, but the lack of activity suggested otherwise. Not that Will was surprised. They’d probably moved Jake.

Will climbed down from the rocks and walked the short distance to his car, deciding it was time to check out the house in person. Emma was going to kill him. She begged him to scope out the location a few days ago to see if her son was here, but he had refused to leave her. She’d almost died from the gunshot wound to her thigh and, until a few days ago, she’d been deathly sick. He hated leaving her even now, but she wasn’t up to withstanding the heat. Nevertheless, leaving her in the shabby motel for an extended period of time wasn’t acceptable either. He wanted to confirm his suspicions and get the hell back.

Emma was a hunted woman.

Will pulled close to a low wall surrounding the yard. There was little natural cover, just sand and a few cacti. While all signs pointed to this place being deserted, he wasn’t stupid enough to walk up to the front door. Grabbing his shotgun, he got out of the car and ducked behind the wall. He waited, searching for any signs of activity inside. Seeing none, he darted across the yard to the side of the stucco house. A gunshot rang out, catching him by surprise.

He hadn’t expect that.

Will regrouped, considering his options. He doubted Jake was inside, but it wasn’t an assumption he wanted to rely on. In fact, he hoped he was wrong. But it made sense that whoever was inside would be waiting for him. He’d made more than a few enemies in the last couple of weeks.

He clung to the side of the windowless wall, then crept to the back corner. A detached garage in the back corner of the yard looked deserted, but so had the house. With no car in plain sight, if whoever was inside had one, it had to be in the garage.

Will ran across the back yard to the dilapidated wooden outbuilding almost making it to the corner when a bullet whizzed past his head. Whoever was inside was sloppy. More confirmation that Jake wasn’t here.

Will easily kicked in the door behind the garage and found a beat-up Camaro parked inside. The rest of the building was empty except for a pair of rusted metal shelves against one wall. He opened the car’s passenger door and checked the glove compartment for the title and registration, without success. Groping under the seats, his fingers brushed against a gun under the driver’s seat. Loaded. Will smiled. He was running low on weapons. The car might actually serve a purpose if it had air conditioning. The clunker he parked out front didn’t.

Will hoped to find a container of gasoline, but the scrub brush outside proved the occupants had little need for a lawnmower. Instead, he found a small can of turpentine, some paint rags and a glass jar full of screws. He dumped out the screws, filled the jar with the turpentine, and stuffed the rags in the top.

He’d smoke them out.

Leaving the stuffy garage into the sweltering heat, he wiped the sweat from his forehead with the back of his branded arm. He couldn’t get out of godforsaken Arizona fast enough. He’d had enough nightmares awakened in the last few weeks without unleashing more by playing commando in the desert.

The unsettled feeling stayed with him as he sneaked around the side of the garage and stopped at the corner. He took a deep breath and refocused, telling himself this was just another mission. Just another of the many terrorist stakeouts he’d run in Iraq. Not that he was trying to rescue the boy who branded the mark on his arm and bound him to his mother as her protector.

He spied on the house for several moments, amazed no one had come out after him. Not yet. He took a lighter out of his pocket and lit the rag, waiting for it to burn down before he threw it into the back window of the house.

“Time for happy hour,” Will said.

It was a risk. There was a chance Jake was inside, but Will now doubted it. Jake was considered far too valuable to be with someone so sloppy. At this point, Will hoped merely to get information.

The fire erupted almost immediately. Will waited about thirty seconds before he ran to the side of the house and watched for the occupants to evacuate, which he presumed would be out the front door. Again, his intuition proved right. Two men in jeans and t-shirts burst out, each with a rifle in his hand.

Will fired a couple of shots into the ground next to their feet, halfway between the front door and the landscape wall. “Hold it right there or the next one’s got your name on it.”

They stumbled to a stop, thrusting their hands into the air.

The rifles dropped the earth with a dull thud, barely heard over the growing crackle of the flames.

“Okay, hands behind your heads and walk slowly over to the wall, then turn around.”

They shuffled forward and spun to face him, their faces pale and drawn with fear. Will hid his surprise. Teenagers. A scrawny dark-haired boy nearly six feet tall and his red-headed companion, who stood several inches shorter as well as wider. What the hell? He’d expected amateurs, but kids? The Cavallo had to be toying with him.

Will moved closer. “What are you little boys doing out here all alone? You a couple of latchkey kids waiting for your mommy to come home?”

The dark headed teen straightened his back and squared his shoulders, glaring at Will in defiance. His anime t-shirt stretched across his thin chest.

“What? You getting a growth spurt?” Will laughed, then lowered his voice to a growl. “You didn’t answer my question. What are you boys doing out here?”

“Waiting for you.” The defiant one curled his lip, accentuating the patches of hair growing unevenly under his nose.

The redheaded boy remained silent, his freckles bursting from his ashen face. His hands trembled over his head.

Will raised his eyebrows. “Do you even know who I am?”

The kid with an attitude narrowed his eyes. “I know you don’t belong here.”

“And what did you expect to do with me once I showed up?”

The silent teen’s lip began to quiver. Will knew the answer before the other boy answered.

Will leveled his shotgun, aiming for the boy’s chest. A flicker of apprehension showed in his eyes before he quickly recovered. Will had to admit that the kid had balls. “You ever kill anyone, Ponyboy? In real life, not in some video game.”

Doubt flashed briefly across his face.

Will turned the gun to the redhead. His quivering had spread to his jaw. “What about you? You ever killed a man before?”

He shook his head violently.

“Yeah, that’s what I thought.” Will turned the barrel back to the first boy. “Obviously, you don’t know who I am or what I’m capable of. You boys picked the wrong man to mess with.” Will cocked his head to the side and glared. “Who do you work for?”

Will was hot, tired, and irritated as hell. He wanted this done. Twisting his gun around, he smacked the boy in the face with his shotgun butt before the kid had a chance to react.

The teen let out a howl and hunched forward, covering his nose to staunch the flow of blood.

“You know, you’re right. You don’t have to tell me nothin’, but I can make damn sure you want to tell me.” He turned to the other boy. Snot ran down over the kid’s lip and he looked close to passing out. “I’m giving you one chance to tell me before I give you a busted nose to match. And trust me, I’m just getting started.”

“He came to us at the pool hall,” the boy blurted. “He told us we had to hang out here until a guy showed up… and then we were supposed to shoot him. But he told us you’d be here sooner… last week. We didn’t think you were gonna show.”

The dark-headed boy moaned as he stood straighter, shooting a glare toward his talkative friend.

Will kept him in the corner of his eye. “Was there ever a boy here? A little blond boy?”

The redhead’s lips thinned and his eyes bugged with fear and confusion. He gave a sharp shake of his head. “No! Just us.”

Will gave him a scathing glare.

“I swear to God, mister! We never saw a little boy!”

“How long you been out here?”

Will wasn’t surprised. Two weeks ago, Will had beaten the shit out of Alex, the bastard who’d fathered Jake, trying to get information about the boy. As far as Emma was concerned, Alex had no claim to him after raping her six years earlier, and Will agreed. Will would have killed him two weeks ago if Emma hadn’t stopped him.

The Cavallo had probably moved Jake the very same night. “And after you killed me, what were you supposed to do?”

“We were supposed to call the guy, but only when you were dead, and then he’d pay us.”

The kid paused realizing what he was saying. His eyes widened.

“Don’t be gettin’ shy on me now.” Will shifted his weight to one side and gave him a cocky smile. “How much?”

The boy swallowed. “Ten thousand. Five to come out, the other five when you were dead.”

Will raised an eyebrow. “Is that all I’m worth? I’m insulted.”

The redhead gulped while Ponyboy pinched his nose, avoiding eye contact with Will.

The redhead’s face wavered with uncertainty. He looked at the gun barrel, then followed it up into Will’s grim face. He cleared his throat. “It’s on my cell phone. In my front pocket.”

“Okay, carefully remove it. You do anything stupid and I won’t hesitate to shoot you.”

The boy gingerly slipped his fingers into his jeans and pulled out the phone, handing it to Will.

Will grinned as he flipped open the phone. “Wow, that’s original.” He found the number and pressed Send.

The kid’s eyes widened in terror. “We weren’t supposed to call him until you were dead.”

Stucco is a material made of an aggregate, a binder, and water. Stucco is applied wet and hardens to a very dense solid. It is used as a coating for walls and ceilings and for decoration as well. Stucco may be used to cover less visually appealing construction materials such as concrete, cinder block, or brick.