Humming to the Beat of His Own Drummer 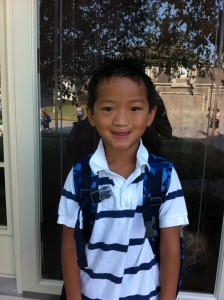 Anyone who thinks that girls talk more than boys has never met my son.

When Ryan was two and a half years old, I adopted him from China. He knew no English and my pathetic Mandarin was lost on his regional dialect. Freaked out by the entire experience, he was quiet for months until he learned enough English to communicate. It didn’t help that Ryan was born with a cleft lip and palate, and although they had been repaired in China, he needed ear tubes so that he could hear better. (And look at that precious face!)

My frustration with our local children’s hospital boiled to the surface when I took him to the ENT to FINALLY get them to schedule his ear tube procedure.  Ryan was terrified. He had just turned three but he didn’t understand when I tried to tell him that the doctor was only going to look in his ears. The poor resident got a stern “This has gone on long enough. This child needs to be able to hear NOW.” Still, it took another two months to fit him into their surgery schedule.

But once he got ear tubes and began speech and language therapy through the school system, he began to blossom. The once shy, scared child became a boisterous, happy (although sometimes pouty) child. An added benefit is that he liked to talk. 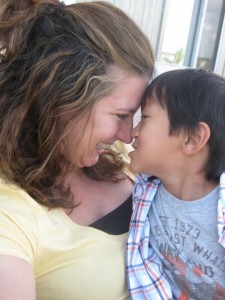 And talk. And talk.

Did I mention that he talked?

It was like he’d lived through four years of silence  (yes FOUR by the time his language had progressed to the point of good communication) and there was no holding this child back. He’ll wake up in the morning and stand next to my bed. He has a repertoire of “I want to watch TV.” “The sun is up.” and my personal favorite: “Are you asleep?”

Ryan’s in kindergarten now and loving it. He’s a rule follower to the extreme, not only following the rules himself but bringing it upon himself to enforce the rules on others. Thus earning him the nickname Officer Ryan. But that’s a post for another day. All of this to say that I was incredibly surprised when I tucked him into bed one night and he volunteered. “We’re not supposed to talk in the hall at school when we go to the library.”

“Yeah, that’s because it would get too noisy if everybody talked. Were you quiet?”

He got a disgusted look on his face, rolled his eyes and said, “No. I had something to say.”

Only in Ryan’s world would verbal communication trump the rules.

We had a discussion about obeying our teacher–a conversation I never expected to have with this child– but part of me was glowing with happiness.

I’d be lying if I said I loved that he talks ALL THE TIME. But I’m the mother of six kids. And I own head phones. Tuning my children out is an art form I’ve long since mastered. He talks to his sisters. He talks to the dogs. He talks to himself a lot. But I never tell him to be quiet, although I do tell him that he has to let his sisters speak sometimes. Most of the time I’m patient, but tonight I’d reached my limit when the kids went to bed an hour late (crazy dance and play schedule) and at 10:00 Ryan laid in his bed humming. And humming. Finally, I yelled up “Ryan, it’s time to go to sleep.”

To which he continued to hum, only quieter.

Ryan is a unique child and he’s a blessing to our family. I can’t imagine my life without him. After everything he’s been through, I’ll never be the one to take his voice way.

OMG he is the cutest!