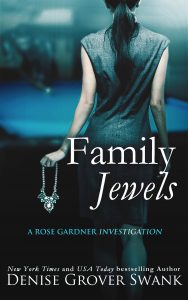 With only three more weeks until the release of FAMILY JEWELS, I thought I’d clear up some confusion about the new Rose Gardner series.

Trouble always comes to those who court it. Rose Gardner’s ability to see glimpses of the future has gotten her into hot water time and again, but so have her curiosity and her sense of daring. Those very qualities helped her defeat the most powerful man in Arkansas—a man so adept at hiding his crimes there was no way to defeat him inside of the law—but her success came at a steep personal price. Now she’s throwing herself into her landscaping business, trying to live a life that’s as orderly as one of her gardens.
Rose’s best friend, Neely Kate, is struggling with her own losses, so when she suggests they help a local man find a missing necklace, Rose agrees. It’ll give both of them a welcome distraction, and besides, it’s a simple investigation. What harm could befall them? But things that should be simple rarely are. In seeking out the necklace, Rose and Neely Kate find themselves in the thick of a power struggle in the Fenton County underworld, one that could dethrone Rose’s friend James Malcolm, the surprisingly moral king.
The last thing Rose should do is court more trouble, but she’s not the type to step away from a friend in need—and she’s also not so sure she wants an orderly life.

I’m really looking forward to reading Family Jewels, although I’ll be sad to see the end of the previous series, I think this is a fantastic idea and a great new direction for your readers who have fallen in love with not just Rose, but the other characters who have been a huge part of the previous series and I look forward to seeing this new start.

Best of luck Denise, you certainly deserve it xx

When will the audiobook be at audible.com? I know there is one coming, because the first chapter was tagged onto the end of the last Rose Gardner Mysteries book. Please make this information available on the page. Thanks.

It is being recorded now. Hopefully it will be ready by the end of January. 🙂

I just want to say, I absolutely love your Rose Gardner series’ ! I have read a lot of books, a lot. And I have never been so addicted and swept in, your style of writing and story telling is captivating! I am absolutely in love with all of your characters from the previous series and was brought back to life when I realized it can still go one with your investigation series. I am excited to read Family Jewles and the novella Trailer Trash! When will the second investigation book come out? I’ll try not to read to fast…

Keep doing the great job you are!

You mention Sins of The Father – I don’t see that listed on your list of books in the Rose Garden Mysteries. Is Sins of the Father called something else. Thanks.

I just got done reading For the birds I have read all of the rose garner books including family jewels and now for the birds pleaasseee tell me there will be another book after that that continues how her life is going with James and violet it left so many in answered questions. I’m obsessed with these books lol