It’s hard to believe but in less than a month I’ll have another book out! Even though Twenty-Eight and a Half Wishes came out first, it was actually the third book I completed.

But my first love was Chosen*. It was the book that  pushed me to write the story in my head, even when I felt completely inadequate.  And even when it scared the crap out of me.

Coming up with a cover for Chosen was hard. The three main characters are Will, Emma, and Emma’s son Jake.  To only put Will and Emma on the cover would make it appear like a romance novel. And while there is a romance, there’s more to the story than that. Not to mention that it doesn’t fit neatly into the romance criteria– nice, neat HEA. (Happily Ever After) I would have loved to have all three, but that proved difficult as well.

Everything Emma Thompson owns fits in a suitcase she moves from one roach infested motel to another. She and Jake, her five year old son who can see the future, are running from the men intent on taking him. Emma will do anything to protect him even when it means accepting the help of a stranger named Will. Jake insists she needs Will, but Emma’s never needed help before. And even though she’s learned to trust her son, it doesn’t mean she trusts Will.

Mercenary Will Davenport lives in the moment. Hauling Emma to South Dakota should have been an easy job, but his employer neglected to tell him about Emma’s freaky son and the gunmen hot on her trail. Instinct tells him this job is trouble, but nothing can prepare him for Jake’s proclamation that Will is The Chosen One, who must protect Emma from the men hunting her power. A power she doesn’t know she has.

Will protects Emma and Jake on a cross-country chase from the men pursuing them, while struggling with memories from his past, his apprehension of Jake, and his growing attraction to Emma. Will’s overwhelming urge to protect Emma surprises him, especially since it has nothing to do with his paycheck and possibly everything to do with the tattoo Jake branded on his arm. Rich and powerful men are desperate to capture Emma, and Will must discover why before it’s too late.

I was so lucky to have found an awesome cover designer, Laura Morrigan. Laura asked me a million questions, not only about Chosen but also the other two books in the series so we could have a unifying theme for all three books. After several email marathon sessions and a Skype call, Laura came up with the concept for all three covers.

I’m not going to say why right now, but the symbol on the cover has significance and it will be used for all three covers. Each book will highlight a different part. I LOVED this idea and I think that Laura did an excellent job of taking a drawing my son and I had done and turning into something fantastic. I’m thrilled.

So without further ado– MY AWESOME COVER!!!! 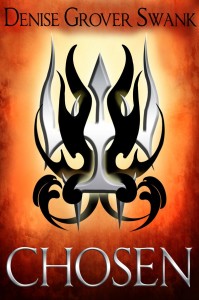 Doesn’t it make you want to read it? Well you can! When it releases September 20th!

*Chosen was my second book. The first is chained to a gigabyte on my external hard drive.

Congrats on another awesome cover! You’re having a big year, lady!

That is a breathtaking cover! It definitely makes me want to read it, and of course so does the blurb! I can hardly wait.