Bonus Scene: When the Bough Breaks

This is a bonus scene meant to be read AFTER you read When the Bough Breaks. It may contain spoilers

Buy WHEN THE BOUGH BREAKS 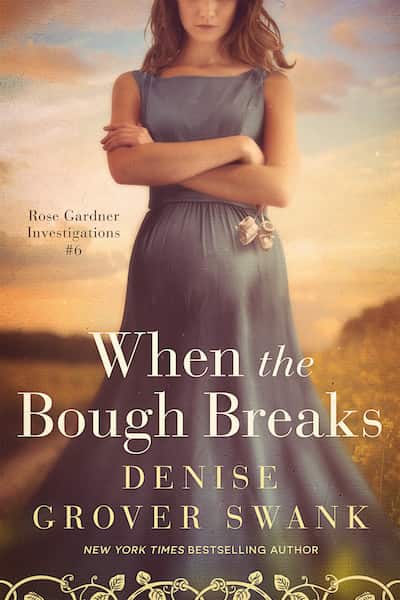 “I can’t get the zipper closed,” I said in tears as I stared at my reflection, wearing the pale peach dress that had arrived in the mail less than three hours before Neely Kate’s wedding. “What am I gonna do?”

“Do you want me to try?” Joe asked softly. He stood behind me, pressing a kiss to the top of my head. He looked handsome in his light gray suit, white shirt, and silver satin tie.

“Even if you get it zipped, I’ll look like a sausage stuffed into a casing.”

“I can’t,” I said as tears trailed down my cheeks. “Neely Kate picked out this dress. The maid of honor can’t go pickin’ out their own dress. That’s not how it’s done.”

“Darlin’,” he said, gently turning me around to face him. “Neely Kate would hate that you’re cryin’ over a dress.”

I buried my face into his chest as more tears fell. I hated that I was so hormonal. I hated that I was still two sizes bigger than any of my own clothes. If Joe had any sense in his head, he’d run for his life. I wasn’t sure the fact that he was gathering me in his arms instead was a sign of love, courage, or stupidity.

“You’re not supposed to be your regular size this soon after giving birth,” he said. “The doctor warned you about that. It hasn’t even been two weeks, Rose. What was Neely Kate thinkin’ orderin’ a dress your regular size?”

“It’s not my regular size,” I sobbed. “It’s a size bigger. There’s no getting around the fact I’m fat.”

“Rose.” He placed a finger under my chin and tilted my head back to look up at him. “I hate that you see yourself as anything less than I do—the most beautiful woman I’ve ever laid eyes on. You gave birth to our perfect daughter less than two only two weeks ago, and a traumatic birth at that.” His thumb brushed a tear from my cheek. “It’s gonna take some time for your body to heal.”

Everything he was saying was perfectly logical, but this was Neely Kate’s wedding and I wanted everything to be perfect for her. There was no way this dress would make the cut, and I had absolutely no idea how to fix it.

“I wish Violet were here.” She’d definitely know what to do.

But Violet wasn’t here, so I needed to figure this out on my own. Calling Neely Kate was out of the question. It was her wedding day, and I wasn’t going to disturb her with problems.

“How about this,” Joe said, still holding me close. “The dress was delivered today, and you both were worried it wouldn’t arrive in time. What if you tell her you didn’t get it? Surely you two had a backup solution.”

I shook my head, still crying. “She’ll know. She’s been tracking the shipment.”

“Darlin’, you’re making yourself miserable about this. Is there anything else in your closet you can wear?”

Joe led me over to the bed and pulled me down to sit beside him. “Rose, I’m gonna call Jed and explain the situation—”

“No!” I exclaimed. “We’re not gonna ruin Neely Kate’s wedding!”

“And if the roles were reversed,” he said, “would you want Neely Kate sobbin’ her heart out? Or would you want to offer her a solution?” When I didn’t respond, he said, “See? I’m callin’.” Then before I could stop him, he pulled out his phone and placed the call. “Jed, this is Joe. We have a bit of a situation here.”

The baby started crying, so I slid off the bed and walked across the hall to the nursery. Hope was in the center of her crib, dressed in a footed sleeper, and starting to scream at the top of her lungs. She was already a woman who knew what she wanted, when she wanted it, and that especially included being fed.

“Okay, sweet baby,” I said as I slipped out of the top part of my dress so I could feed her. “Momma’s hurryin’.” The dress had a side zipper and wasn’t conducive to breastfeeding, something I’d already stewed about, especially since I’d have to nurse Hope at least once at the reception. I let the dress fall to the floor and scooped Hope up in my arms, cradling her close as I sat in the rocking chair and unfastened my nursing bra. She didn’t waste any time latching on and getting down to business.

Joe found us there a minute later.

He stood in the doorway, watching us with a soft smile. “Neely Kate had a backup plan she hadn’t told you about. Her cousin has a peach dress that will work. Witt’s on his way out to get it now. You can put it on at their house.”

“Thanks,” I said, feeling foolish for crying over something so trivial. We were all relatively happy and healthy. A dress was nothing in the scheme of things. Joe was right—I could wear a gunny sack and Neely Kate wouldn’t care. She just wanted us there. But I wanted everything to be absolutely perfect for her. And at the moment, I was going to be a giant eyesore. “Sorry for acting so foolish.”

He walked into the room and knelt in front of me, smiling. “Darlin’, you weren’t actin’ foolish.” He reached his hand up to cup my cheek. “I truly wish you could see yourself how I see you. You have no idea what seein’ Hope in your arms does to me.” His voice broke. “I’ve never been happier in all my life. But when I see you unhappy, I feel like I’ve failed you. It makes me wonder if you regret your decision.”

“No,” he said. “That’s not it. It’s just…” He stopped and the corners of his mouth lifted slightly as worry filled his eyes. “This only works if we’re both happy.”

When I finished nursing, Joe was waiting. He scooped her out of my arms and held her against his burp-rag-covered shoulder and started patting.

“Go,” he said, beaming with happiness. “We’ve got this part covered. You go get ready.”

“Let me just take a moment to enjoy lookin’ at my family,” I said, the wonder and marvel of it hitting me as though seeing it for the first time. All I’d ever wanted for my entire life was to have a loving family, and now that my wish had come true, it still seemed too good to be true.

“We’re gonna be late,” Joe said as he paced the room, bouncing our baby on his shoulder. “I’ve got this.” Hope let out a loud belch and Joe laughed. “That’s my girl. Now let’s get you changed and dressed.”

I walked into the hall, not quite ready to let this moment go. I loved watching Joe with our daughter. Every day he confirmed I’d made the right decision. That I’d given Hope the best father I could have hoped for.

He laid her on the changing table and started unsnapping her sleeper. “This is a big day, Little Hope. Aunt Neely Kate and Uncle Jed are getting married and you get to be the flower girl. You’ll be the prettiest flower girl anyone ever saw.” He lowered his voice, then whispered, “Don’t tell your mommy we had this chat, but one day soon I hope to marry her. And then you can be the flower girl at our wedding too.”

He glanced up and saw me standing outside the doorway and smiled, his eyes radiating his happiness. I knew he wanted to get married, but I told him I wasn’t ready to set a date yet. For one thing, I didn’t want our wedding to eclipse Neely Kate and Jed’s in any way, and for another, I’d already had Hope out of wedlock, and Joe’s name was on her birth certificate. It wasn’t like we were going to change anything about his paternal status. Or ours. As far as I was concerned, it was a legal issue. Still, I understood why it was so important to Joe. So much had happened in such a short period. I just needed time.

I put on the dress I’d worn to Hope’s baby shower, and while I’d felt pretty in it at the time, there was no getting around the fact it was a maternity dress and my baby was nearly two weeks old. Still, I could wear it to the ceremony if Neely Kate’s cousin’s dress fell through. It wasn’t about me anyway. It was about Neely Kate and Jed, and as long as I wasn’t distracting anyone’s attention from them, everything would be okay.

Sitting on the edge of the bed, I slipped my feet into my heels as Joe walked into our bedroom carrying Hope. She was wearing a fluffy peach dress with lots of white lace trim and ruffles. She had a peach headband with a giant peach-colored flower attached.

“One way or the other,” I said, then stood, taking in the sight of the two people I loved most in the world. I was the luckiest woman alive, and I was being foolish for letting a dress make me so frustrated.

“Hope,” he said, staring down at our baby with a grin, “did you know what a lucky girl you are to have the best mommy in the whole world?” He walked over and placed a gentle kiss on my lips, love and adoration filling his eyes. “Trust me, I sure know how lucky I am.”

“You hush now,” I said with a laugh, resisting the urge to take her from him. His two-week paternity leave was nearly done, and I’d get her all day to myself after that. Besides, he loved holding her as much as I did.

“She’s probably the cutest thing I ever saw,” he said as he cradled her in his arms. “I hope Neely Kate doesn’t mind that our baby steals her limelight.”

I laughed again. “I think Neely Kate knows she’s got stiff competition, but she’s willing to risk it.” I glanced at the clock on my bedside table. “We need to get goin’ if we’re gonna be there in plenty of time for me to change.” I stopped and looked up at him. “Did you pack the diaper bag?”

“We have enough diapers to last us through a three-day weekend instead of an evening out. I packed a bag with frozen milk and bottles in case you can’t get away to nurse.” I started to say something, and he held up his hand. “I also have three other outfits as well as extra nursing pads for you.” When I started to interrupt again, he said, “And your pump. It’s already in the truck, under the seat.”

“It’s like you thought of everything,” I said with a soft laugh.

His eyes danced. “I tried.”

“You’re absolutely perfect,” I said, giving him a kiss, careful not to crush our daughter. “I think I’ll keep you.”