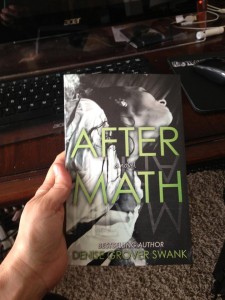 There’s a contest going on for After Math. If you go here, you’ll see the rules. Basically, it’s spread the word about After Math and have a chance at winning some prizes.

But there’s a second part to the contest, one I came up with while writing up the rules for the main contest. I called this second one a “bonus” contest.  I was creatively frustrated for quite some time before I started torturing characters in books,  and I looked for ways to express that creativity in various, embarrassing ways on my blog.  (You can find links to these if you follow the link above.)

Yeah, I did some crazy things, but I”m quite certain I’m not the only creatively frustrated person out there.

So I came up with the bonus contest: Make a creative recommendation for After Math and be eligible for a $50 Amazon or Barnes & Noble gift card. And if I’m blown away by more than one entry, I’ll give away more than one prize!

But creativity is subjective, so I’m using a TEAM of judges to help me pick. I’ll tell you more about them in a week or so, but we’ve joined together and created a box set of EIGHT mystery novels from eight bestselling authors and we’re selling them for a limited time at $0.99. (Even at full price it will be $9.99.) So you can see how awesome they are, right? (My book Twenty-Eight and a Half Wishes is included in the omnibus.)

So I know what you’re saying. “Denise, what in tarnation is a ‘creative recommendation’?”

Well, let me tell you.

A creative recommendation is ANYTHING that tells people about After Math. It can be a YouTube video. It can be a fan made book trailer. I can be a poem or a song you make up. Change the words to an existing song. Make up a goofy story. It can be a video, an mp3, a  Word document. It has to be something that *I* can share with my readers on my website. You can be serious. You can be crazy. Bottom line, I want YOU to be creative and HAVE FUN.

The winner will get a $50 Amazon gift card (or B&N if you so desire.)  And if there’s more than one entry that blows the judges away, I’LL GIVE MORE THAN ONE PRIZE. I want you guys to have fun with this!!! And I’m willing to pay up to encourage you.

When I pick the  finalists, I’ll post links to their entries  while the judges decide who the winner(s) are.

The original contest ended on March 31, but I’m going to give you all time to WOW me! The contest is now extended to April 15.  Winners will be announced by April 22, if not sooner.  The finalists and winner(s) will be featured on my website with links shared via Facebook and Twitter.

Since I didn’t have any entries, I asked my daughter Julia and her friend, Megan, to make an example for you all. Let’s just say you have some stiff competition. If they were eligible. Which they aren’t. Unless no one else enters. Don’t let me down, you all.