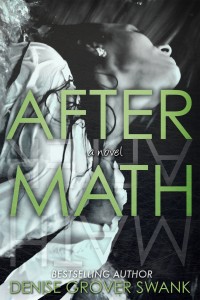 I’ve been hard at work getting my new adult book, AFTER MATH, ready for it’s mid-March release! My hoped for date of March 12 is looking good!

AFTER MATH is different than my other books. It definitely falls into the true “romance” genre. Anyone who’s read anything of mine shouldn’t really be surprised since I have some type of romance in everything I write. What might surprise you is the sexual heat level of this book.

Okay, it’s hot for me, and I had a few early readers who were pleasantly surprised. (I’m just warming you all up for THE CURSE KEEPERS, my new urban fantasy that 47North will release in late fall 2013. One of my early readers for TCK called it “classy hot.”) That being said, many “hot” romance authors would laugh at my description. My personal style tends to run toward hot without body parts named. Fifty shades of Grey it’s not.

I’m really excited about AFTER MATH, and I confess, a little bit nervous. I hope you all like it as much as I do. To celebrate , look for some exciting giveaways the week of  AFTER MATH’s release!

**You can enter a Goodreads giveaway for FIVE print books here.**

I’m posting the first three chapters below so you can see what all my fuss is about.  After you read it, I’d love to know what you think!

Scarlett Goodwin’s world is divided into Before and After.

Before she agreed to tutor Tucker price, college junior Scarlett was introvert, struggling with her social anxiety and determined to not end up living in a trailer park like her mother and her younger sister. A mathematics major, she goes to her classes, to her job in the tutoring lab, and then hides in the apartment she shares with her friend, Caroline.

After junior Tucker Price, Southern University’s star soccer player enters the equation, her carefully plotted life is thrown off its axis. Tucker’s failing his required College Algebra class. With his eligibility is at risk, the university chancellor dangles an expensive piece of computer software for the math department if Scarlett agrees to privately tutor him. Tucker’s bad boy, womanizer reputation makes Scarlett wary of any contact, let alone spending several hours a week in close proximity.

But from her first encounter, she realizes Tucker isn’t the person everyone else sees. He carries a mountain of secrets which she suspects hold the reason to his self-destructive behavior. But the deeper she delves into the cause of his pain, the deeper she gets sucked into his chaos. Will Scarlett find the happiness she’s looking for, or will she be caught in Tucker’s aftermath?

Previous
IndieReCon 2013 in Two Weeks– Don’t Miss It!
Read More
Next
How Do I Format a Document? (How To Publish a Book #1)
Read More
Subscribe
5 Comments
Oldest
Newest Most Voted
Inline Feedbacks
View all comments

Aaahhh…..Denise I love, I love you new book. What I like about your books is that they are interesting to read from the very first page, and it just keeps going until the end. I can hardly wait till mid March. Thank you for another fantastic book.

Can Not Wait To Finish! Wonderful!!!

Review: After Rose, this is officially my 2nd favorite book by DGS and my 2nd favorite use of Scarlett (after GWTW). This is my genre of reading and it only took me 3 hours to read b/c life got in the way. I love the characters and how I can relate to them. I love how the plot drags you in by your toes and how you don’t see the unexpected coming at you at full speed. I love the emotions she is able to evoke and how you truly feel part of the story, like you could have lived it yourself. I love how your unsure if there is going to be a true happy ending, but really even if there wasn’t you will be ok with the real results are. I was entranced from start to finish and I only hope her readers truly appreciate her talent. I look forward to more and appreciate her devotion to her writing and her fans! (and my 2 new favorite vocabulary words are now shit-ton and sheninaganery)

I am hooked! I can’t wait for the rest of the book. The first 3 chapters sucked me in. I feel like I am with them. I love the way your books read. March 12 seems so far away. Great job.

AFTER MATH is Live and Giveaway! | Denise Grover Swank

[…] If you want to read the first three chapters of AFTER MATH go here. […]